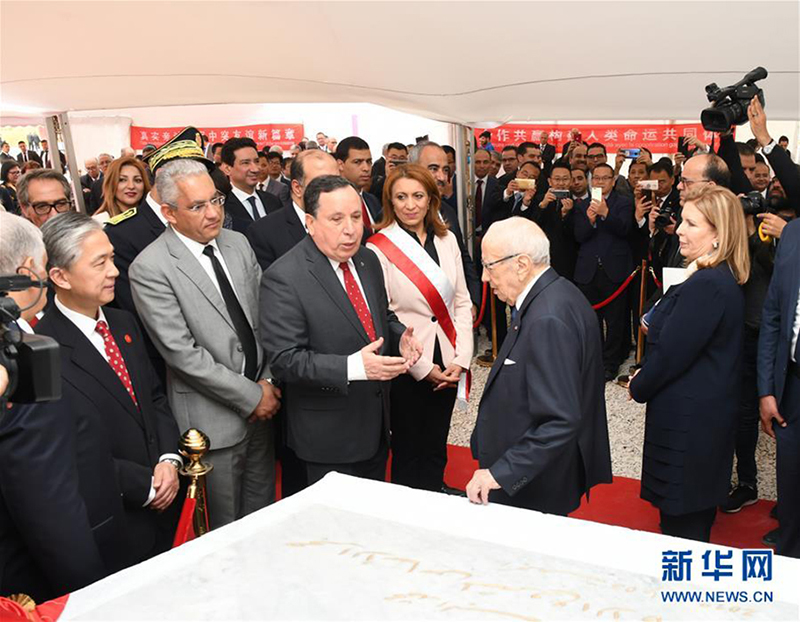 This is the case of Tunisia’s Fore  ign Minister Jeshinavi (middle left) briefing President Esebsi (middle right) on the project of China’s aid to build the Tunisian Diplomatic Training Institute. Xinhua News Agency (photo by Adair)
At the groundbreaking ceremony, Esebsi said that this project is a symbol of the friendship between the Chinese people and the Tunisian people and has positive significance for the future development of bilateral relations.
Tunisian Foreign Minister Jeshinavi told Xinhua News Agency that since the independence of Tunisia, China has provided various assistance and support to Tunisia. Tunisia actively supports and participates in China’s “Belt and Road Initiative” and hopes that the cooperation between the two countries will cover various fields in the future.
Wang Wenbin, Chinese ambassador to Tunisia, said that after the completion of the Tunisian Diplomatic Training Institute, it will become a window for the country to display its external image and a symbol of cooperation between China and Turks.
The Tunisian Diplomatic Training Institute is affiliated with the Ministry of Foreign Affairs. The total construction area of ​​the project is more than 12,000 square meters, including multi-purpose classrooms, lecture halls, conference halls and other facilities. Upon completion, it will become a training base for diplomatic personnel.